This is a collection of  “persuasive cartography,” maps intended primarily to influence opinions or beliefs - to send or reinforce messages - rather than to communicate objective geographic information (Tyner 2015, 1087).  Maps of this sort have also been described as “suggestive cartography,” “rhetorical cartography” and “propaganda maps” (a less apt term, because the word “propaganda” has become a pejorative).

In fact, no map provides an entirely objective view of reality.  Even the best-intended cartographer must decide what projection to use, what features to include and what to exclude, what colors, what shading, what text, what images – all of which shape the message communicated by the finished product. Every map is somewhere along a spectrum from objective to subjective, from science to art. We deal here with maps that have crossed a line – itself admittedly subjective – into the preference for communicating some message other than objective geographic information.

Why maps? Why not paintings or sculpture or other persuasive visual images, or for that matter, persuasion by the written word alone? Are the messages communicated by Guernica or To Kill a Mockingbird somehow less persuasive than those embodied in maps? The answer is that a map is different from other forms of communication because it is uniquely presumed to be a source of honest, objective information.

We see this in a Dutch emblem book from 1714, which includes a portrait by Vincent Vander Vinne of a mapmaker looking up intently from his charts: 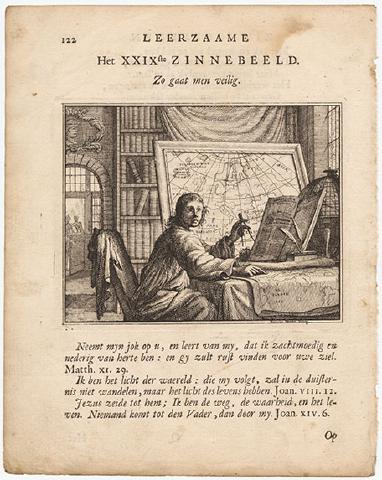 The plate is titled “Thus Men Go Safely” (Zo gaat men veilig), and it is used to illustrate the biblical passage, “I am the way, the truth and the life.”  More than two centuries later, Beryl Markham wrote in West With the Night (1942, 245-46) that a map “is not like a printed page that bears mere words, ambiguous and artful, and whose most believing reader – even whose author, perhaps – must allow in his mind a recess for doubt. A map says to you, ‘Read me carefully, follow me closely, doubt me not.’”

Educated people “usually accept subconsciously and uncritically the ideas that are suggested to them by maps.” Boggs 1947, 469. Today, “every member of a modern, developed society has been taught what to expect of a map: the map is accurate, is truthful, does not contain errors.” Edney 1996, 186. From our earliest memories of a parent following a road map to reach an unfamiliar destination, most of us are conditioned to regard maps as devoid of “ambiguity” or “artfulness,” a means simply of presenting “the way, the truth.” As another scholar put it (Wagner 1937, 1:3), “There is nothing that has such an air of verisimilitude as a map.” In short, maps have what Stephen Colbert calls “truthiness” – and more of it than any other medium of persuasion.

There are two important aspects – dimensions, as it were – to any persuasive map: the message or subject of the map, and the methodology or persuasive techniques employed.

The messages of persuasive cartography extend to the full range of human concerns: religious, political, military, commercial, moral and social. The following subjects are specifically labeled in the collection for easy searching:

The methodology of persuasive cartography has broadened over time as technology and communication skills have developed. See Tyner 2015, 1089-91. The collection reflects a variety of persuasive tools: allegorical, satirical and pictorial mapping; selective inclusion or exclusion; unusual use of projections, color, graphics and text; and intentional deception.